There is increasing evidence that kisspeptin, the peptide product of KISS1 gene and its receptor (GPR54), regulate reproductive processes through actions on other organs than hypothalamus. Therefore, the study for the first time, was conducted to investigate the nucleotide sequences and mRNA expression levels of KISS1 and GPR54 genes in pituitary, endometrium, ovary and oviduct of prolific Jintang black goat (JTG) and non-prolific Tibetan goat (TBG) during pro-estrus. By RT-PCR strategy, we obtained that the KISS1 cDNA sequence was 408-bp long, encoding a putative peptide of 135 amino acids. The GPR54 cDNA sequence was 244-bp long, encoding a putative peptide of 81 amino acids. There were two base changes in KISS1, and one base change in GPR54, but these base changes did not result in amino acid substitution between these two breeds. Real-time PCR analyses revealed that both KISS1 and GPR54 genes were expressed in all four tissues examined. KISS1 was most highly expressed in pituitary (p<0.05) and its expression was greater in JTG than TBG (p<0.05). In conclusion, a high KISS1 expression level in pituitary of prolific goat breed might be associated with its great litter size.

The anteroventral periventricular nucleus (AVPV)/the preoptic area (POA) and the arcuate nucleus (ARC) in the hypothalamus have been well documented as the action sites of kisspeptin-GPR54 signaling for reproductive regulation in mammals, however, there is increasing evidence that kisspeptins regulate reproductive processes through actions on other organs, including the pituitary gland, uterus, oviduct, placenta and ovary (Gottsch et al. 2004; Castellano et al. 2006; Gaytan et al. 2007; Richard et al. 2008; Radwanska and Kosior-Korzecka 2016; Uenoyam et al. 2016; Xu et al. 2016; Cielesh et al. 2017). In addition, there is little information about association between the variants and expression of KISS1/GPR54 with litter size in different goat breeds (Cao et al. 2010; An et al. 2013). Therefore, the present study, for the first time, compared the nucleotide sequences and mRNA expression levels in pituitaries, ovaries, oviduct and endometria for KISS1 and GPR54 genes between the highly prolific Jintang black goats (Capra hircus) and the non-prolific Tibetan goats (Capra hircus).

All the experiments were performed according to the Regulations for the Administration of Affairs Concerning Experimental Animals (Ministry of Science and Technology, China; revised in August 2011) and approved by the Institutional Animal Care and Use Committee of Southwest Minzu University, Chengdu, China.

The extreme high prolific breed of Jintang black goat (JTG, n= 5), and the non-prolific breed of Tibetan goat (TBG, n=5) were used in this study. The experiment was carried out in breeding season (October), and animals were kept under the similar conditions. All animals selected had same age (4 yr) and parity (four parities), and estrus were synchronized. The JTGs had a history of successive multiple births (≥ triplet births) and the TBGs had a history of successive single birth. All does were treated for 13 days with Controlled Internal Drug Release Devices (CIDR) containing 300 mg progesterone (Eazi-Breed CIDR, InterAg, Hamilton, New Zealand) to synchronize estrus. They were then slaughtered at 40 h after CIDR removal for collection of anterior pituitaries, ovaries, oviduct and endometria. Part of the removed tissue samples was snap-frozen in liquid nitrogen and then stored at -80°C to be used for RNA extraction.

The KISS1 and GPR54 mRNA expressions in tissues (ovary, endometrium, oviduct and pituitary) were analyzed by quantitative RT-PCR. GAPDH gene was chosen as housekeeping gene to correct potential variations in RNA loading. Primers specific for target goat genes (Table 1) were designed with Primer Premier 5.0 software. Real-time PCR was performed using the CFX96TM real-time PCR Detection system (Bio-Rad) in a 10 μL volume containing SSO Fast TM Eva Green Supermix 5 μL, 0.5 μL cDNA, 1 μL of each of specific forward and reverse primer, and 2.5 μL ddH2O. The PCR conditions were as follows hot-start condition (95°C, 3 min) followed by 40 cycles at 95°C for 10 s, 60°C annealing for 20 s and 65°C extension for 5 s, with a final extension at 65°C for 5 min before holding at 4°C. The baseline was used to determine the Ct (cycle threshold) in each reaction. The melting curve was constructed for each primer pair to verify the presence of one gene-specific peak and the absence of primer dimer. For the quantification, standard curves were generated by amplifying serial dilutions of each amplicon. The standard curve slope, translating efficiency (E) and the linear correlation (R2) were -3.393%, 97.1% and 0.999% for KISS1 gene, respectively, and 3.358%, 98.5% and 0.998% for GPR54 gene respectively. Each sample was tested in triplicate and the Ct of target gene was compared with the internal reference gene GAPDH. The Ct resulting from RT-PCR was analyzed by Pfaffl method (Pfaffl 2001).

As expected, the goat KISS1 and GPR54 cDNA sequences were found to consist of 408 and 244 bp, respectively. They were respectively submitted to NCBI GenBank Accession Nos. KX586353 and KX586355 for JTG, KX586354 and KX586356 for TBG respectively. The coding region of KISS1 cDNA encoded 135 amino acids (aa) and the coding region of GPR54 cDNA encoded 81 aa. The goat KISS1 contains a putative signal peptide of 17 aa, located upstream of the sequence. There were two base changes in KISS1 (G to C at bases 231 and 403 from JTG to TBG, respectively), and one base change in GPR54 (T to C at bases 96 from JTG to TBG), but both of these changes do not result in amino acid substitution (Figures 1A and 1B). The nucleotide sequences as well as deduced amino acid sequences of JBG KISS1 and GPR54 were compared with the homologous sequences from other species (breeds) and the degree of identity is presented in Table 2. 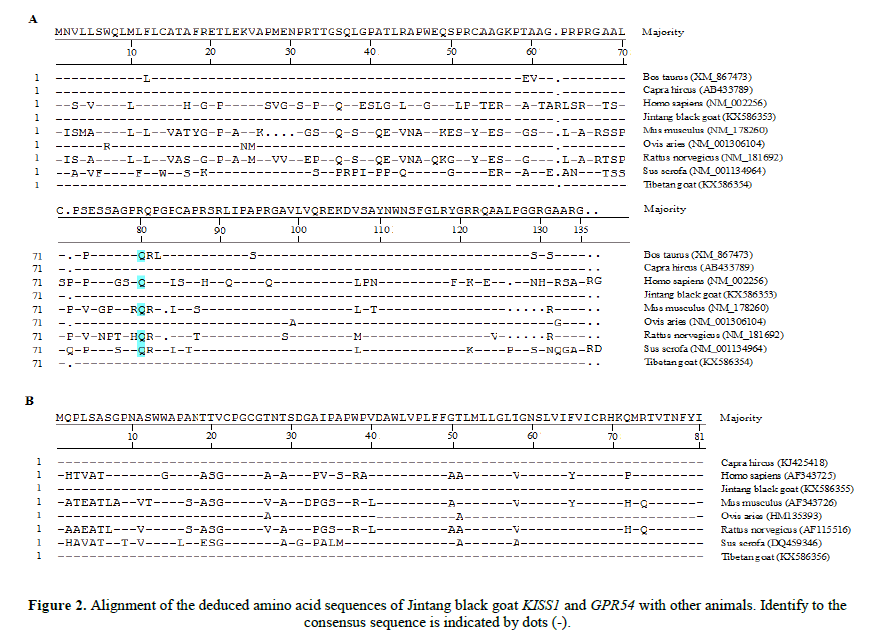 Figure 2: Alignment of the deduced amino acid sequences of Jintang black goat KISS1 and GPR54 with other animals. Identify to the consensus sequence is indicated by dots (-).

All kisspeptin-10 amino acids were identical except for the last residue (Y or F), whereas at other region the sequence is highly diverse.

The construction of a phylogenetic tree

Figure 3: Phylogenetic trees based on a nucleotide alignment of KISS1 (A) and GPR54 (B) constructed by MEGA 6.0 Software. Sequences were obtained from the NCBI GenBank database. 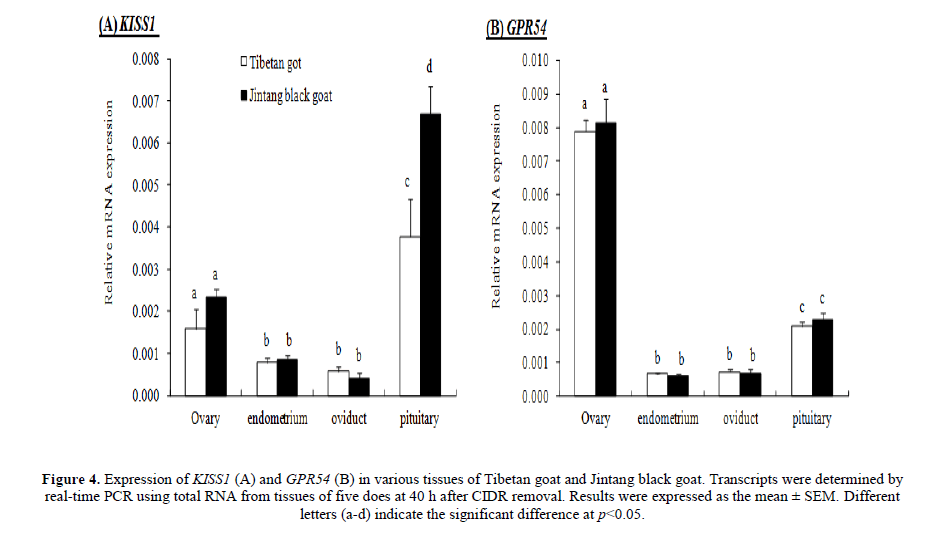 Figure 4: Expression of KISS1 (A) and GPR54 (B) in various tissues of Tibetan goat and Jintang black goat. Transcripts were determined by real-time PCR using total RNA from tissues of five does at 40 h after CIDR removal. Results were expressed as the mean ± SEM. Different letters (a-d) indicate the significant difference at p<0.05.

Expression of KISS1 mRNA in normal heart, brain, liver, lung, and skeletal muscle was undetectable by northern blot analysis. Weak expression was found in the kidney and pancreas, but the highest expression was observed in the placenta (Lee et al. 1996). However, KISS1 and GPR54 mRNAs have been examined in the brain, ovary, oviduct and uterus of various species of animals by RT-PCR (Gottsch et al. 2004; Castellano et al. 2006; Gaytan et al. 2007; Radwańska and Kosior-Korzecka 2016; Xu et al. 2016). In the present study, we found that both KISS1 and GPR54 mRNA were expressed in ovary, endometrium, oviduct and pituitary in JTG and TBG by RT-PCR. KISS1 was highly expressed in pituitary than the other tissues detected, and pituitary KISS1 expression of JTG was higher than TBG (p<0.05). GPR54 was highly expressed in ovary, but there was no significant difference between these two goat breeds. Several studies demonstrate that kisspeptin regulates GnRH and gonadotropin secretion (Navarro et al. 2005; Roa et al. 2008; Navarro and Tena-Sempere 2012; Choe et al. 2013; Vargas Trujillo et al. 2016) and links to seasonal breeding (Revel et al. 2006; 2007; Simonneaux et al. 2009; Ansel et al. 2010; Espigares et al. 2017). Kisspeptin can stimulate the quiescent hypothalamic-hypophyseal-ovarian axis of ewes in anestrus. A low-dose infusion of the peptide into the peripheral circulation of anestrous ewes reliably stimulates gonadotrophin secretion and induces LH surges followed by successful ovulation in females (Caraty et al. 2007; Sebert et al. 2010). Recent evidences also indicated that locally produced kisspeptins have direct actions in the pituitaries and ovaries independent of AVPV/POA and ARC in the hypothalamus. Kisspeptin receptor haplo-insufficiency causes premature ovarian failure despite preserved gonadotropin secretion (Gaytan et al. 2014). The intraovarian kisspeptin system may be regulated by sympathetic nerve activity and that the peptide, either from a neural or ovarian origin, is required for proper coordinated ovarian function (Castellano et al. 2006; Ricu et al. 2012). KiSS-1 and GPR54 genes are co-expressed in rat gonadotrophs, indicating that local effect of kisspeptin on the anterior pituitary gland cannot be ruled out (Richard et al. 2008; Radwańska and Kosior-Korzecka 2016). Therefore, high expression levels of KISS1 mRNA in pituitary of JTG may be associated with its high fecundity and non-seasonal breeding.

There were two synonymous mutations in KISS1 gene and one synonymous mutation in GPR54, but these base changes did not result in amino acid substitution between prolific Jintang black goat and non-prolific Tibetan goat. A high KISS1 expression level in pituitary of prolific breed might be associated with its great litter size.