Inflammation is a normal physiologic protective reaction of the body through activates the immune system to against pathogen-induced infection and harmful stimuli induced tissue injury (Hagemann et al., 2007). However, inflammation also is a “double-edged sword”. Chronic inflammation was associated with pathological process of several diseased conditions or disorders such as asthma, rheumatoid, arthritis, atherosclerosis, Alzheimer’s disease and cancer (Krishnamoorthy and Honn, 2006). As an important component of the Gram-negative bacterial cell wall, lipopolysaccharide (LPS) can induce inflammatory responses and lead to the disturbance in immune system function (Lou, T. et al. 2015). Intratracheal administration of LPS has gained wide acceptance as a clinically relevant model of severe lung injury (Tao, W. et al. 2015). Nuclear factor-kappaB (NF-kB), a nuclear transcription factor, is a regulator of inflammatory processes. Former studies reported that NF-kB played an important role in the pathogenesis of lung diseases (Bao S, et al. 2015). NF-kB governs maximal transcription of numerous cytokines including tumor necrosis factor- (TNF-a), interleukin (IL)-1, and IL-6 (Li Y. et al. 2015). The inhibition of NF-kB might be a useful strategy for the intervention of inflammatory disease (Wei D, et al. 2014). EPS has anti-inflammatory and immune regulating effect to macrophages. At the same time, A lot of cytokines Participate in the immune regulation and inflammatory response of the body. Our study on the adjustment of EPS to related cytokines and the signaling pathways control. of NF-κB and MAPK in RAW264.7 cell.

To 1 × 106 RAW264.7 cells, 500 μL 4°C lysate was added and incubated at 0°C for 30 min. The solution was centrifuged at 12,000 rpm at 4°C for 5 min to obtain the total protein solute. Next, a 20-μL protein sample was placed in a cellulose acetate membrane, dried at 37°C, and dyed with amido black for 5 min. Bleaching occurred by liquid decolorization oscillation three times, for 5 min each time. The membrane was completely dissolved in DMSO, and sample absorbance was read at a 630-nm wavelength. Each sample was replicated three times.

The 10% separation gel was slowly poured into the glue groove. Water and saturated n-butyl alcohol was then added, and the gel was incubated at room temperature for 2 h. The upper aqueous phase was discarded, and the gel was rinsed three times in double-distilled water. The comb was inserted, 6% concentrated gel was added, and incubated at room temperature for 20 min. The comb was removed, samples were rinsed three times in double-distilled water, and 20 μg electrophoresis samples were loaded in the sample groove. The initial electrophoresis voltage was 80 V, when indicators moved into the separation gel, the voltage was increased to 120 V, and electrophoresis continued until the indicator reached the end of the gel.

The gel plate was removed, transferred to a Petri dish, transfer buffer was added, and incubated for 30 min. At the same time, the nitrocellulose membrane was immersed in transfer buffer and incubated for 20 min. The plate and nitrocellulose membrane were assembled into a “sandwich” structure and placed in the electrophoresis groove. Electrophoresis was run at 4°C for 12 h under an electric current of 150 mA.

After electrophoretic transfer, the nitrocellulose membrane was rinsed with PBS. Tween 20 three times for 5 min each time, immersed in 2% BSA, incubated for 30 min, and rinsed another three times in PBS/Tween20 for 5 min each time. Finally, the membranes were blocked with 5% (w/v) non-fat milk in TBST buffer for 1 h at room temperature and incubated with the corresponding primary antibodies overnight at 4°C. After washing, the blots were incubated with horseradish peroxidase conjugated secondary antibodies. 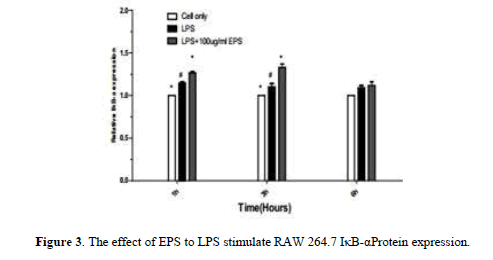 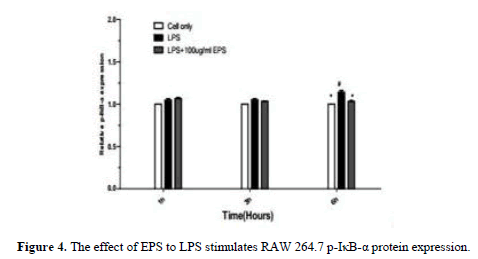 As an important proinflammatory cytokine, TNF-α is able to increase the generation of some other inflammation-related cytokines, such as IL-6 IL-1β and interferon-γ (Butler et al., 1997). As a principal component of the outer membrane of Gram-negative bacteria, LPS can enter the blood stream and conduce to a variety of inflammatory dysfunction which may ultimately lead to death (Wang J et al. 2014). LPS markedly decreased the IB-protein level by increasing its degradation and phosphorylation in murine microglial cells (Oh et al. 2013). IL-10 and dexamethasone have been shown to have anti-inflammatory effects through increasing the mRNA expression of NFBIA and inhibiting NF-kB activation (Ing et al. 2014). Inflammation is a major pathway involved in ALI induced by LPS (Kim et al. 2015). TLR4 is the major receptor through which LPS activates the inflammatory pathway (Zhang et al. 2015). Previous studies have shown increased mRNA expression levels of TLR4 after injection of LPS in rats (Wu et al. 2012; Cao et al. 2015). Activation of NF-kB is increased during inflammation and it is responsible for the expression of different inflammatory mediators induced by LPS (Lappas 2013). Since NFBIA is a major regulator of NF-kB activation (Nelson et al. 2004).

AMPK acts as a sensor of cellular energy status capable of regulating vital metabolic pathways in the cell (Hardie, D.G. et al. 2012). AMPK is activated by conditions that increase the AMP/ATP ratio (Hardie, D.G. et al. 2012). Meanwhile, metformin attenuates the cytokine-induced expression of pro-inflammatory and adhesion molecule genes by activation of AMPK and inhibiting NF-κB activation (Ducommun, S et al. 2014). Recent studies have shed lights on how AMPK activation attenuates oxidative stress. Activated AMPK could promote NADPH synthesis while limiting its consumption (Jeon, S.M. et al. 2012). Our recent study showed that AMPK activation is involved in perifosine’s inhibitory effect on TNF-α production. EPS inhibit inflammation may be associated with activation of MAPK signal pathway. When LPS stimulated RAW264.7, MAPK Cascade activation, which can be shown to be stage by stage phosphorylation, promoted cell division, proliferation, etc., thereby reduced the inflammatory injury of LPS to cells. To sum up, the damage of alveolar macrophages was closely related to the immune response mediated by the activation of MAPK signaling pathway in cells. EPS suppression of inflammation may be associated with activation of MAPK signaling pathways.