We examined the agronomic performance and stability of strawberry cultivars in three environments, using the Annicchiarico and AMMI methods. Thirteen strawberry cultivars were evaluated (Aromas, Oso Grande, Dover, Sweet Charlie, Tudla, Festival, Camarosa, Monterey, Palomar, Portola, Camino Real, San Andreas and Albion), in the towns of Lavras-MG, Guarapuava-PR and Uberlândia-MG. The experimental design was blocks with randomly distributed treatments, with four replications and 18 plants per experimental unit. The total number of fruits (TNF) plant-1, total mass of fruits (TMF) g plant-1, number of commercial fruits (NCF) plant-1 and mass of commercial fruits (MCF) g plant-1 were evaluated. Variance analysis detected a significant effect for cultivar, environment, and cultivar x environment interaction for all the characteristics. The agronomic performance of the Dover cultivar stood out for TNF, TMF and NCF, while the Camarosa cultivar stood out for MCF. When we examined phenotypic stability in terms of yield in different cultivation environments, the Albion cultivar stood out for TMF, and Monterey and San Andreas for NFC.

Strawberry crops (Fragaria x ananassa Duch) have a wide geographic distribution (Morales et al. 2012). Most of the genotypes of commercially grown strawberries in Brazil originate from genetic improvement programs in the United States (Galvão et al. 2017), and they are not well adapted to the diverse edaphoclimatic conditions existing in Brazil.

In order to evaluate stability, the Annicchiarico (1992) and AMMI (Zobel et al. 1988), methodologies have been employed in an attempt to find the most stable strawberry cultivars in the evaluation environments. The AMMI analysis allows the best details of the level of the sum of squares of the interaction in a unique mathematical and statistical model (García-Peña and Dias, 2009). On the other hand, the Annicchiarico method (1992) is based on variance analysis, where the general confidence indexes (ωi) are estimated, for favorable and unfavorable environments (Cruz et al. 2014). Thus, the higher the index value (ωi), the greater is the chance of success and confidence in the choice of the cultivar with the greatest stability (Cruz et al. 2014).

Several studies of adaptability and stability in vegetable crops have been carried out in recent years in Brazil, such as in pumpkin (Santos et al. 2015), pepper (Pimenta et al. 2016), carrot (Carvalho et al. 2017) and onion (Oliveira et al. 2016). However, for strawberries, studies of agronomic performance and phenotypic stability of cultivars using the Annicchiarico and AMMI methods are rare, having mainly been applied to recentlylaunched varieties and varieties considered to have a neutral photoperiod in contrasting environments.

We evaluated the phenotypic stability of 13 strawberry cultivars in the municipalities of Lavras-MG, Guarapuava-PR and Uberlândia-MG, employing the Annicchiarico and AMMI methods.

The experiments were initiated during the first week of May, 2013 in Guarapuava, and the same week in 2014 in Lavras and Uberlândia. An experimental design of blocks with randomly distributed treatments was used, evaluating 13 cultivars (Aromas, Oso Grande, Dover, Sweet Charlie, Tudla, Festival, Camarosa, Monterey, Palomar, Portola, Camino Real, San Andreas and Albion), with four replicates, each consisting of 18 plants.

The cultivars were carried out in a system of tunnels, 1.0 m high in the central part, covered with a low density 100 micron polyethylene film, and with beds 1.0 m wide by 0.25 m high, coated with a black polyethylene film 30 microns thick. The cultivars were planted in quincunx, with 0.3 m x 0.3 m spacing. The lateral parts of the tunnels were raised during the day for better ventilation and to facilitate the action of pollinator agents, and closed during the night to avoid leaf wetting.

The results were subjected to the Bartlett and Shapiro-Wilk tests, fulfilling the assumptions of homogeneity of the variances and normality of errors; the analysis of individual and joint variance was performed considering the fixed model for genotypes and environments. The means were grouped by the Scott Knott test at 5% probability. An analysis of phenotypic stability was also carried out by the Annicchiarico method (1992), with the aid of the statistical software GENES (Cruz, 2013) and AMMI (Zobel et al. 1988) in the Stability software (Ferreira, 2000).

Accumulated rainfall during the period of the conduction of the experiments was distinct among the environments, with 1205, 395 and 519 mm for Guarapuava, Lavras and Uberlândia, respectively (Figure 1). Too much rain, such as in Guarapuava, can contribute to a reduction of the action of pollinator agents. In Guarapuava, severe frosts that harmed plant development were also observed; on July 23, 2013, there was snow during the flowering stage and fruit production, which resulted in reduced pollination and abortion of flowers, and a reduction in fruit production. 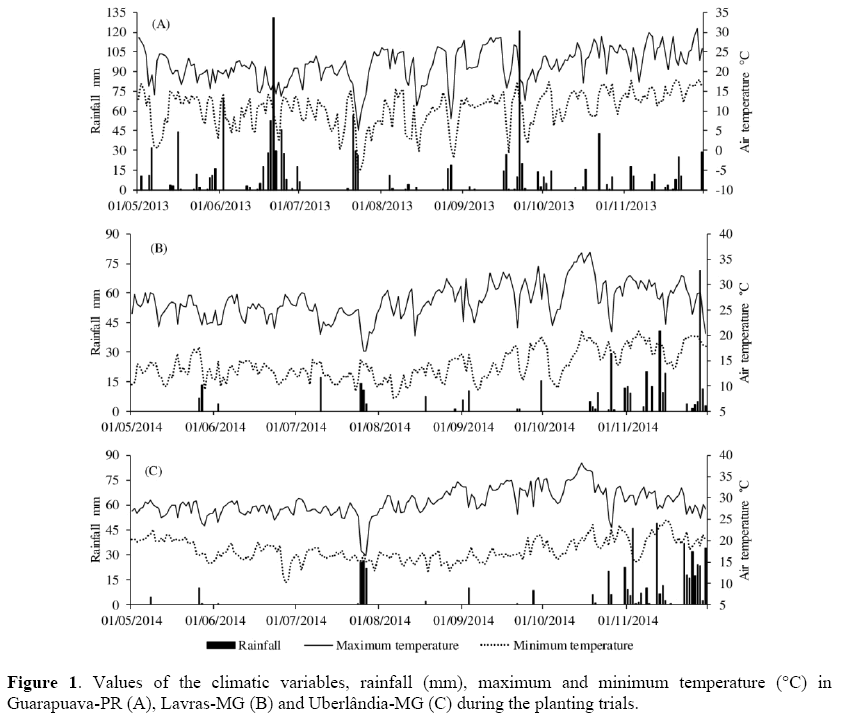 Figure 1: Values of the climatic variables, rainfall (mm), maximum and minimum temperature (°C) in Guarapuava-PR (A), Lavras-MG (B) and Uberlândia-MG (C) during the planting trials.

Table 1: Summary of the analysis of joint variance for the characteristics: fruit number (TNF, plant-1), total mass of fruits (TMF, g plant-1), number of commercial grade fruits (NCF, plant-1), mass of commercial fruits (MCF, g plant-1), and analysis of stability (AMMI), with percentage of explanation of variance, for 13 strawberry cultivars assessed in the environments of Lavras-MG, Guarapuava-PR and Uberlândia-MG.

When comparing the mean in each environment, Uberlândia was higher for the TNF, NCF and MCF characteristics, Uberlândia and Lavras were higher for TMF. On the other hand, Guarapuava had the lowest performance for TMF and MCF (Table 2). Distinct results among the environments may be due to the considerable geographical distance between the sites, and the influence of the environmental elements on the phenotypic expression of the cultivars, especially temperature, photo period, rainfall and fertility of the soil.

*Means followed by the same lower-case letter in the column and capital letter on the row are not significantly different by the Scott-Knott test at P < 0.05 probability.

In Uberlândia, the mean TNF (104.05) was higher than in Lavras (90.00) and Guarapuava (94.71) (Table 2), showing accordance with the analysis of adaptability and stability by the Annicchiarico method (1992), in which Uberlândia was rated as a favorable environment with an environmental index of 7.79 (Table 3).

In the analysis of TNF, taking into account the general environment, cultivars Dover, Camarosa and San Andreas obtained indexes of confidence (ωi) above 100%, indicating that these strawberry cultivars maintained above average productivity, even when subjected to different soil and climate conditions. However, when considering only unfavorable environments, cultivars Dover, Festival, Camarosa and Camino Real stood out, with indexes of confidence (ωi) above 100% (Table 2). These results show that these cultivars maintained good levels of productivity, even in environments that did not have favorable conditions.

The Dover cultivar stood out for TNF in comparison with the other environments of Guarapuava and Uberlândia, while it, together with Camarosa, was ranked in the first group of cultivars for the Lavras environment (Table 2). These results were possibly the ones that contributed for these cultivars to be considered suitable for production, considering both the general environment and the unfavorable ones for these characteristics. The mean TMF for the environments Uberlândia (1018.92) and Lavras (956.80) was higher than that of Guarapuava (722.88, Table 2), being in accordance with the Annicchiarico environmental classification, which considered the two environments from Minas Gerais State favorable (Lavras 57.30 and Uberlândia 119.41) (Table 3). For this characteristic in Lavras, cultivars Oso Grande (1081.75 g), Dover (1213.25 g), Camarosa (1251.00 g), Camino Real (1122.75 g) and Albion (1156.88) stood out; in Guarapuava, Dover (1343.43); and in Uberlândia, Oso Grande (1739.50) and Camarosa (1781.50). As for phenotypic stability, the ones that stood out were cultivars Dover, Camarosa and Albion, when considering the general environment, and Oso Grande, Camarosa and Albion, when considering a favorable environment (Table 2).

When we examined phenotypic stability, considering the general environment for NCF, cultivars Dover, Camarosa, Monterey, San Andreas and Albion stood out, and in the unfavorable environment, cultivars Dover, Monterey, Palomar, Portola, Camino Real, San Andreas and Albion were superior (Table 2). The number of commercial fruits characteristic is extremely important, taking into account that these are the fruits that suitable for in natura consumption and bring the highest prices.

The mean of the MCF characteristic (846.46) in the Uberlândia environment was higher than that of Lavras (762.50) and Guarapuava (499.70) (Table 2). However, in the Annicchiarico classification, the environments located in Minas Gerais state were considered favorable, while the one in Guarapuava was considered unfavorable (Table 3).

One cultivar that, because of certain agronomic characteristics, is more suitable for growing in a region, may not present the same phenotypic behavior when exposed to soil and climate conditions in other growing environments, making it difficult to recommend a cultivar in a wide geographical area (Cruz et al. 2012). Along the same line, for phenotypic stability of MCF in a general environment, cultivars Camarosa, Camino Real, San Andreas and Albion are recommended, as they stood out with ωi above 100%. In the unfavorable environment, cultivars Oso Grande, Dover and Camarosa (Table 2) stood out. In other words, while cultivars Camarosa, Camino Real, San Andreas and Albion have greater genetic potential with higher stability for the production of commercial fruits in the environments evaluated, cultivars Oso Grande, Dover and Camarosa have the greatest potential in an environment in which the soil and climatic conditions are not as adequate.

The Camarosa cultivar presented the highest values for the MCF characteristic, which is considered the most relevant for strawberry producers, with values of 1090.38 (Lavras) and 1562.00 g plant-1 (Uberlândia) (Table 2). Supporting these results observed for the Camarosa cultivar, Morales et al. (2012), assessing the productivity of strawberry cultivars in the Central-South region of Paraná, and Costa et al. (2015), selecting strawberry cultivars based on productivity, adaptability and stability in a low tunnel in Espírito Santo State, also observed good production when compared to other cultivars. According to the stability analysis through the Annicchiarico method (1992), cultivars Camarosa, San Andreas, Dover and Albion were the ones that stood out the most for the agronomic characteristics that we evaluated.

In the analysis of stability using the AMMI method, the accumulated explanation in the first axis was 80.21%, 92.04%, 86.11% and 93.94% for TNF, TMF, NCF and MCF, respectively, using 54.16% of the degrees of freedom that form the C x E interaction (Table 1). The higher the explanation in the first axis, the higher the standard concentration, and the lower the concentration of noise in the AMMI analysis. In the biplot AMMI 1 model, axis x represents TNF (Figure 2A), TMF (Figure 2B), NCF (Figure 2C) and MCF (Figure 2D); axis y represents the cultivar x environment interaction (PCAI 1). The strawberry cultivars and the environments that are closer to zero are the most stable ones, while the most distant ones from zero are the most adapted to specific environments and contribute the most to the cultivar x environment interaction (PCAI 1). 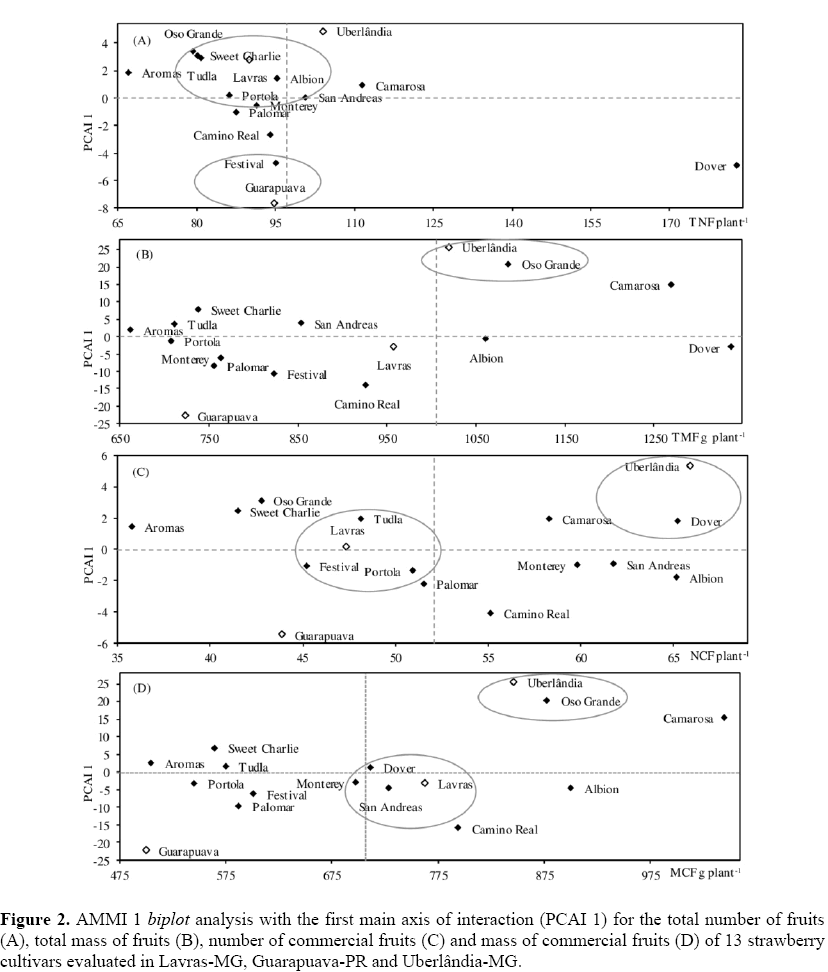 According to the biplot analysis (Figure 2), taking into consideration the low scores (close to zero) typical of environments and cultivars that contribute little to the interaction, and characterized as stable, among the environments, Lavras was the most stable, while for cultivars, the ones that stood out were: for TNF (Monterey, San Andreas and Portola), TMF (Albion and Portola), NCF (San Andreas, Monterey and Festival) and MCF (Dover and Tudla). Regarding the greatest phenotypic stability and yield above the general mean of the experiment, for TNF (San Andreas); TMF (Albion); NCF (San Andreas and Monterey); and MCF (Dover) stood out.

The stability evaluation methods (Annicchiarico and AMMI) identified different strawberry cultivars as the most stable. A coincidence was noticed between the methods only for Albion, regarding TMF, and Monterey and San Andreas for NCF. In wheat, a divergence of stability of genotypes using the Annicchiarico and AMMI methods (Possatto Júnior et al. 2017b) was also noticed. Also, it is reported that the Eberhart and Russell, AMMI methodologies, and mixed models can also present similar results in the classification of genotypes with broad stability (Faria et al. 2017). Nonetheless, these same authors noticed divergence in the indication of maize hybrids with specific adaptability to favorable and unfavorable environments.

The Annicchiarico and AMMI methods used together provide relevant information to farmers when choosing a strawberry cultivar. The use of several methods is recommended to evaluate the phenotypic stability and help in the decision-making process (Polizel et al. 2013).