The study aimed at the selection and evaluation of Eucalyptus spp. clones for the production of wood by means of multivariate statistical techniques. A total of 84 Eucalyptus clones were used belonging to the breeding program in Rio Grande do Sul, Brazil, in a randomized block design, with 20 replicates. The selection of clones from their values of genetic divergence and heterogeneity in relation to the others can be used to increase variability in breeding populations. Improvement strategies such as the Intrapopulation Recurrent Selection can be "fed" from selections made based on these parameters, but also focusing on increasing productivity and improving wood technology. There is a great difference in behavior of the clones for each environment, demonstrating the influence of the genotype × environment interaction, which can be evaluated later in the clonal tests amplified or in the observation plantings of these clones that will serve for the future indication of genotypes for the commercial plantations

The genus Eucalyptus belongs to the family Myrtaceae, originating in Australia, where it comprises more than 600 different species. In Brazil, Eucalyptus plantations occupy 5.7 million hectares of planted trees and are mainly located in Minas Gerais (24%), São Paulo (17%) and MatoGrosso do Sul (15%). There was a growth of 2.4% in the area of Eucalyptus planted in the last 5 years in the country. The state of MatoGrosso do Sul led this growth, registering an increase of 400 thousand hectares in this period, with an average growth rate of 13% per year (Ibá, 2017). Eucalyptus is the main responsible for placing the country among the world's largest producers of cellulose. The increase of Eucalyptus productivity is mainly due to the performance of genetic improvement, through the acquisition of intra and interspecific hybrids, naturally or controlled through cloning (Fonseca et al., 2010; Rosado et al., 2012). The clonal Eucalyptus planting areas have been expanded throughout the national territory, due to the ease of the multiplication processes, the possibility of solving the heterogeneity of the forest plantations, as well as the promotion of the homogeneity of the technological properties of the wood, reflecting in the industrial performance improvement. Before the final recommendation of a clone, it undergoes a series of evaluations in different growing environments (Sudaricet al., 2005). This is necessary, due to the environmental diversity that occurs, most often among different growing environments, favoring the phenotypic variation of the genotypes, through the interaction between genotype and environment (GxE) (Resende, 2005). The choice of genotypes with high productivity, adaptability and stability is an important alternative to minimize the effects of the GxE interaction (Cruz &Carneiro, 2003).

In order to evaluate the physical, chemical, mechanical and anatomical properties of wood, the multivariate analyzes are widely used in structural analyzes of forests in phytosociological studies (Assiset al., 2012; Lima et al., 2011; Lobãoet al., 2011; Protásioet al., 2012; Trugilho et al., 2003). Among the multivariate techniques most used by researchers are the analysis of canonical variables, grouping methods and main components. The analysis of canonical variables is one of the most suitable multivariate techniques in situations in that many dependent and independent characters of one or more genotypes are analyzed, allowing the analysis of the structure of linear relationships between two groups or character sets formed by metric variables, in order to maximize the correlation between them (Protásio et al., 2012; Hair Junior et al., 2009). The optimization method proposed by Tocher, performs the stratification of the genotypes into groups at one time, using a single criterion to keep the intra-group mean distance always lower than any intergroup distance (Cruz & Carneiro, 2006). The method proposed by Sing (1981) makes it possible to quantify the relative contribution of the characters through the genetic distance among them. Dissimilarity measures have been proposed for the quantification of distances among genotypes. The generalized distance of Mahalanobis is widely used when experiments with replicates are available (Simon et al., 2012). This is different from the other techniques because it takes into account the correlations among the characters evaluated (Cruz; Regazzi; Carneiro, 2012). In view of the need to obtain genetically superior Eucalyptus clones that promote productivity coupled with quality, the present study aimed at the selection and evaluation of Eucalyptus spp. clones for the production of wood by means of multivariate statistical techniques.

The experiments were installed in three environments, in the districts of Eldorado do Sul, Butiá and São Gabriel (Table 1). As a common control in all trials, a clone of the commercial species Eucalyptus saligna was used.

A total of 84 Eucalyptus clones were used (Table 2) belonging to the breeding program in Rio Grande do Sul, Brazil, in a randomized block design, with 20 replicates and one plant per plot, spacing 3.50 × 2.14 m. Silvicultural practices were performed according to the particularities required by each environment.

Table 2. Description of the 84 clones evaluated in the three environments and their respective species/crosses.

After obtaining the data, they were submitted to a joint analysis of variance, and the significance was interpreted by the F test at 5% of probability. Afterwards, the Shapiro-Wilk test for normality proposed in 1965, based on the W statistic was performed. In order to verify the homoscedasticity of the data, the Hartley test was applied. Interaction tests were performed and then multivariate models were used. All statistical procedures were performed using the Genes software (Cruz, 2013).

The use of multivariate analyzes aims to show the similarity among the treatments, through the use of the association among the variables, in order to form groups and to demonstrate the contribution of each character to the differentiation of the genotypes. Dismemberment of the multivariate analysis by environment allows to reveal the behavior of the clones in each environment separately.

From Table 4, it is possible to identify that, for the variable diameter at breast height (DBH), both Eldorado do Sul and São Gabriel locations obtained seven classes, where the 15 cm measurement was the most frequent. These values indicate the good performance of the clones, since more than 50% of the clones obtained values equal or superior to 15 cm. On the other hand, the Butiá environment presented a greater number of classes (eight), obtaining a lower magnitude of the values for this variable, where 12.75 cm was the most frequent measure. Also, for the variable plant height (PH), the environments differed by the number of classes, where Eldorado do Sul presented eight classes, Butiá seven classes and São Gabriel nine classes, and also by the magnitude of the classes, where the most frequent measurements in the environments of Eldorado do Sul, Butiá and São Gabriel were 18.75 cm, 13 cm, 16.5 cm respectively.

Table 4. Results for the grouping of 84 Eucalyptus genotypes in three environments, using the Tocher optimization method, based on standardized mean Euclidean distance.

The distribution of frequencies of the phenotypic classes, shown in Figure 1, reveals that Butiá was the environment that contributed the most to the dissimilarity of the variables diameter at breast height and plant height, with 77.79% and 9.49%, respectively. For the wood volume variable, the Eldorado do Sul environment had the largest contribution to distinguish it with 39.54%, followed by the São Gabriel environment with 28.93%. (Figures 1 and 2). 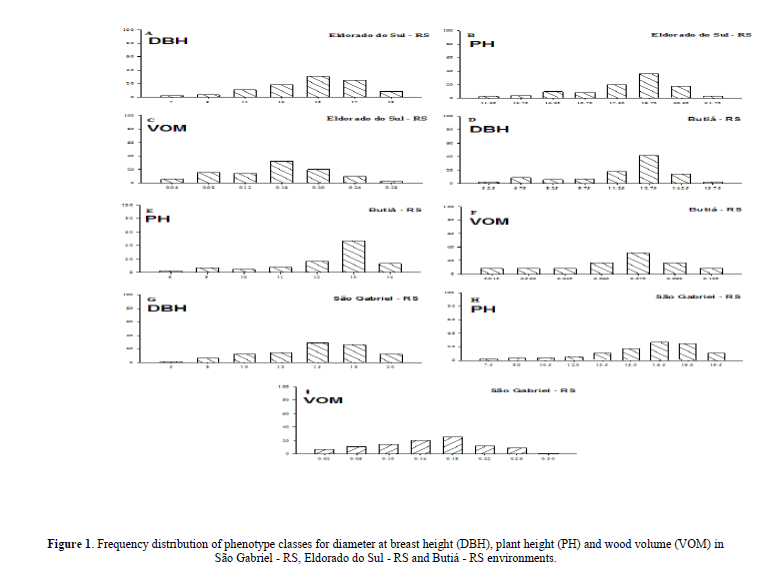 According to Table 4, it is possible to verify the groupings of the genotypes by the Tocher optimization method, where, for the Eldorado do Sul environment, 13 groups were formed. It was verified that group I was composed of 27 accessions, with approximately 32% of individuals, group II with 19 accessions (22%) and group III with 16 accessions (19%), totaling 73% of the individuals, these values indicate that there is great intragroup homogeneity. Also, 27% of the remaining individuals were distributed in 10 groups, where group IV was formed by six accessions, groups VI and VII constituted by three accessions, and groups V, VIII and IX composed by two accessions. It is possible to verify that the groups X, XI, XII, XIII were composed of only one accession each, which, according to Vasconcelos et al. (2007) indicates high divergence among clones for this environment. This divergence is of great importance for the work of the breeder, since it allows its exploration for the future development of cultivars (Table 4).

The Butiá environment revealed grouping results similar to Eldorado do Sul, presenting the formation of 12 groups. Among the groupings, the group I highlights, composed of 43 accessions with 51.2% of the individuals. Groups II and IV were composed of 11 accessions each, groups III and V by five accessions each, groups VI and VII by two accessions each. The remaining groups (VIII, IX, X, XI and XII) were composed of clones with higher dissimilarities, where each accession formed a specific group. The results found for these two environments coincide with a study by Caixeta et al. (2003) in Eucalyptus clones, where the authors analyzed 44 clones, which were grouped in 11 different groups. On the other hand, the São Gabriel environment had less influence on the dissimilarity of the clones, having grouped them into only three groups, and group I was composed of 82 accessions or 97.6% of the individuals. The other two groups had only one accession each.

Through the dendrograms it is possible to perceive the genetic divergence among the 84 Eucalyptus clones, where the most dissimilar clones for the Eldorado do Sul environment were genotypes 26 and 45 (Figure 3). In the Butiá environment, the largest distances were found for clones 11 and 76 (Figure 4) and, for the São Gabriel environment, clones 13 and 66 (Figure 5). 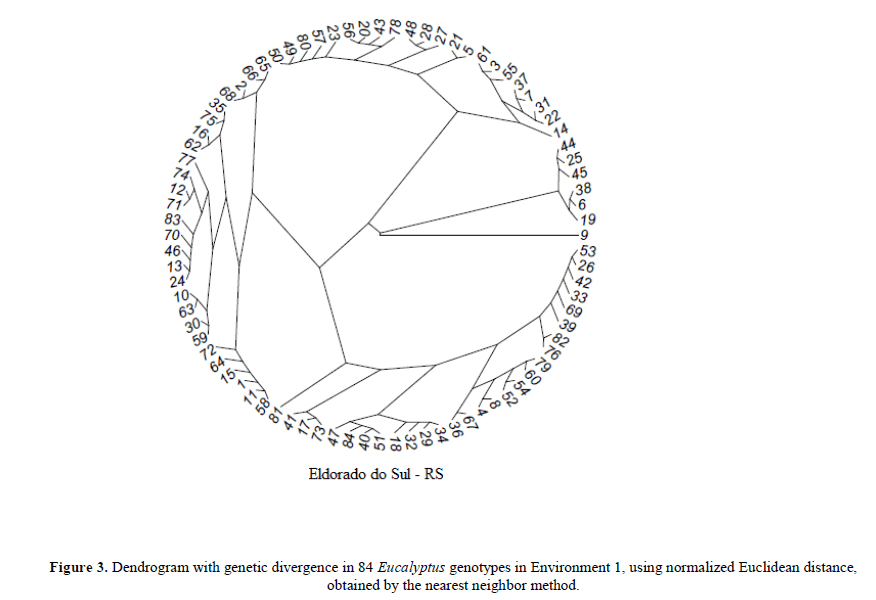 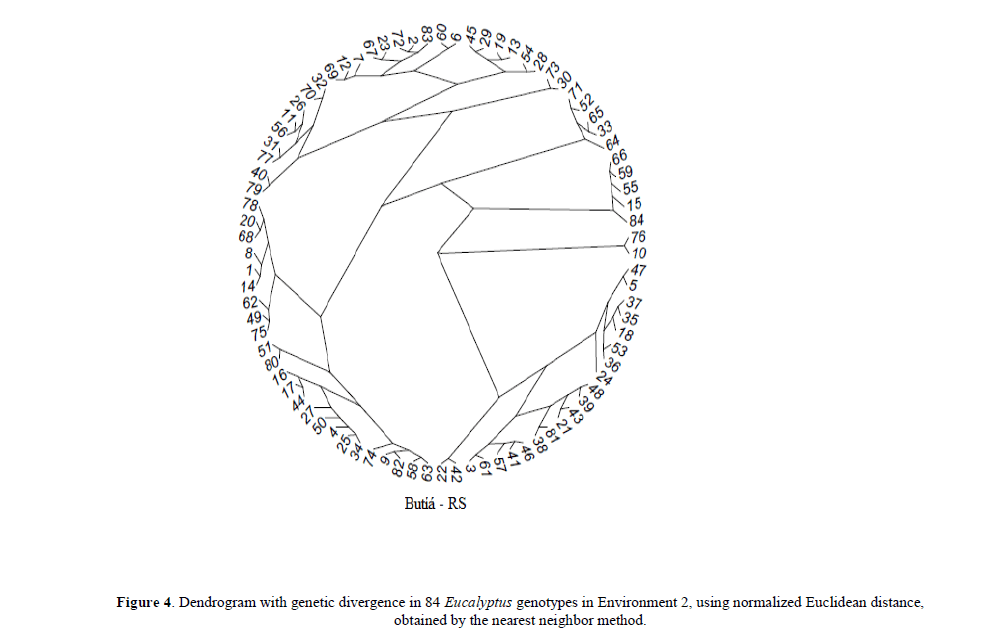 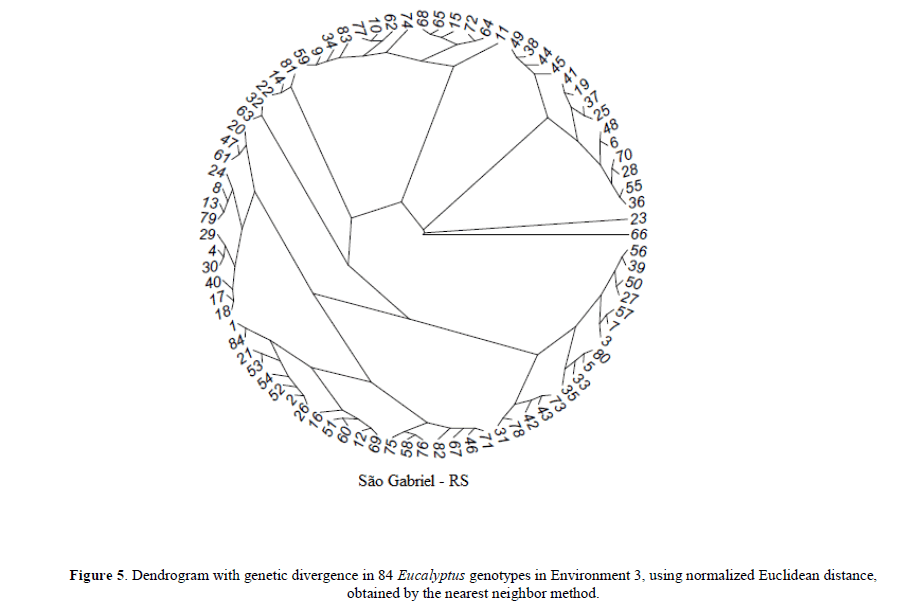 It is possible to highlight the divergence of the environments studied from the results shown in Figures 5 and 6, which demonstrate the behavior of the clones in each growing environment. Clones that disaggregate from the others indicate greater genetic variability, thus, for the Eldorado do Sul environment, 4 groups can be distinguished, clones being clustered distinctly: clones 45, 44 and 25, clones 38, 6 and 19, clones 72 and 9, and the remainder of the clones clustered. Also, for the Butiá environment, it is possible to highlight the similar behavior of clones 22 and 24, these forming a group. Two other groups can be identified, one of which is formed by clones 76 and 10, and the other by clones 55 and 16. The São Gabriel environment had clone 66 demonstrating great variability, forming a group. Two other groups varied from the others, the first one being formed by clones 23 and 45 and the second by clones 25 and 81. Clones highlighted in distinct groups are the ones that most contribute to the interaction between genotype and environment (GXE). 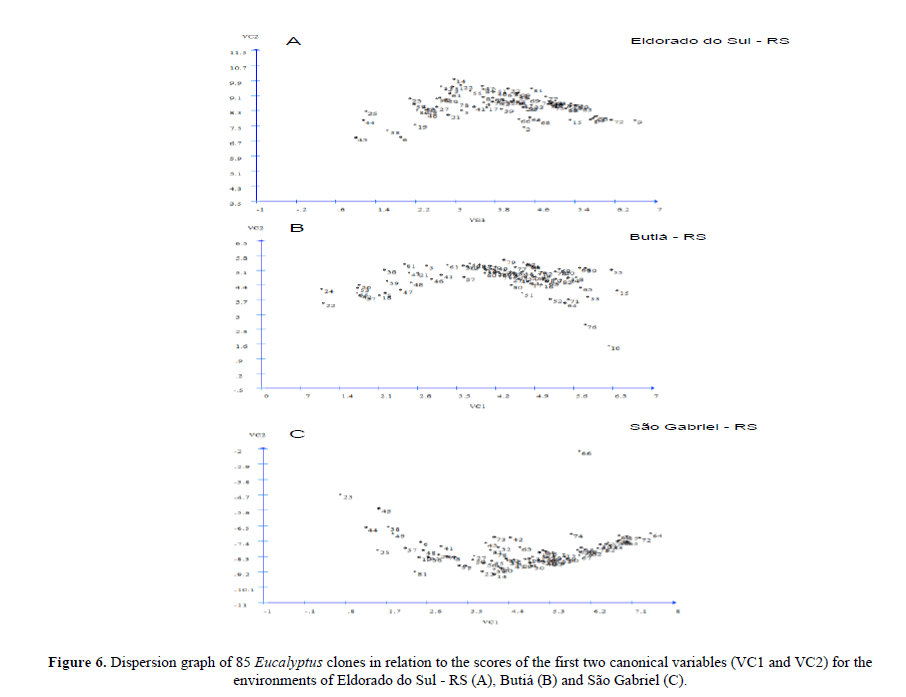 Figure 6: Dispersion graph of 85 Eucalyptus clones in relation to the scores of the first two canonical variables (VC1 and VC2) for the environments of Eldorado do Sul - RS (A), Butiá (B) and São Gabriel (C).

Figure 5 represents the graphical dispersion in the two-dimensional space of the 85 clones under study, using the first and second canonical variables. The groups formed by means of the graphic dispersion of the scales show that in the São Gabriel environment, clone 66 was the most dissimilar among the clones tested in this environment, following the same tendency of the groups found by the Tocher optimization method and normalized Euclidean distance, thus reinforcing the data obtained by the different multivariate techniques for this environment. However, for the other environments the results obtained by the different tests were not concordant, where for the Eldorado do Sul environment, from the graphic dispersion of canonical variables it was possible to identify a more dissimilar group of clones 6, 19, 25, 38, 44 and 48, and for the Butiá environment a group with clones 76 and 10 (Figure 6).

The selection of clones from their values of genetic divergence and heterogeneity in relation to the others can be used to increase variability in breeding populations. Improvement strategies such as the Intrapopulation Recurrent Selection can be "fed" from selections made based on these parameters, but also focusing on increasing productivity and improving wood technology. There is a great difference in behavior of the clones for each environment, demonstrating the influence of the genotype × environment interaction, which can be evaluated later in the clonal tests amplified or in the observation plantings of these clones, that will serve for the future indication of genotypes for the commercial plantations.