Genetic diversity is the basis for genetic improvement, providing genes for new cultivars. Stylosanthes scabra is a legume used in pastures, presenting economic importance in tropical and subtropical regions. Molecular markers are targeted in population studies, thus we evaluated the genetic diversity distribution of S. scabra in Brazilian semi-arid northeastern among and within populations, from molecular markers ISSR. Four natural populations of S. scabra located in the municipalities of Santa Cruz do Capibaribe, Floresta, Sertânia and Petrolina from Pernambuco state were used. We selected seven ISSR primers for amplification and analyzed 75 individuals. A total of 88 bands were amplified with a percentage of 95.27% polymorphism at the species level. AMOVA test revealed that 40.0% of the total genetic variation is within populations while 60.0% among populations. The population differentiation was 0.332 and the migrant’s number per generation was 0.5. Grouping analysis confirmed a high level of differentiation among populations. The populations with the greatest variability were Santa Cruz do Capibaribe and Petrolina, and the ISSR markers were efficient for the genetic diversity quantification in S. scabra, which presented greater variability among populations than within populations. In short, this variability will be very useful in future breeding programs for this species

The scarcity of pastures in Brazilian semi-arid north-eastern in dry seasons has stimulated the advancement in studies of native forage plants (Santana Neto et al., 2015). Forage legumes can be used as a protein source to correct the deficiency of natural pastures (Tufarelli et al., 2010), moreover contain high levels of minerals and vitamins (Idowu et al., 2013).

The incorporation of forage legumes into the ruminant diet as a complementary food improves feed intake and feed converting (Pen et al., 2013). Thus, the inclusion of these legumes in animal feed also reduces the costs with the compound (Olafadehan et al., 2014). The genus Stylosanthes is a forage legume, which has extensive adaptation and resistance to biotic and abiotic factors (Pangga et al., 2004, Nagaich et al., 2013), with erect and prostrate species, predominantly perennial (Costa et al., 2008). This legume obtain nitrogen by association with diazotrophic bacteria (Mendonça et al., 2017), and can be indicated for the recovery of degraded pastures (Fabrice et al., 2015). However, Stylosanthes scabra can develop on soils with low levels of available nutrients, particularly phosphorus, conferring an advantage over other species (Gonzalez et al., 2000).

There are twenty-five species of Stylosanthes in Brazil and thirteen of them are found only in national territory (Santos-Garcia et al., 2011). S. scabra is a species with a large occurrence in South America (Calles and Schultze-Kraft, 2016), and this species is more common in the Brazilian Northeast, occurring in different environmental conditions (Oliveira et al., 2016). In other states from Brazil, this species occurs in Goiás, Minas Gerais, São Paulo (Brandão and Costa, 1979), Mato Grosso and Mato Grosso do Sul (Costa et al., 2008).

Stylosanthes scabra has some commercial cultivars, such as the cultivar Seca, launched in partnership between the International Center for Tropical Agriculture (CIAT) and the Commonwealth Scientific and Industrial Research Organization (CSIRO), which has stood out for its adaptability and agronomic performance under rainfed conditions in the subtropical climate. The cultivar Seca contains more than 17% of crude protein with low level of tannin (Mpanza et al., 2013). According to Akinlade et al. (2008), S. scabra can obtain a dry mass production up to 1.97 Ton.ha-1.

Exploring the full potential of S. scabra is essential to know the genetic variability about this species, supporting plant-breeding programs (Araújo et al., 2016). The genetic diversity evaluation of the species within and among populations can generate information for the in situ genetic conservation of the species natural populations (Gonçalves et al., 2010). In addition, the existence of variability in natural populations allows the evolution of new genetic combinations (Medrano et al., 2014), which may present greater capacity for evolution and adaptation to changes in environmental conditions (Srihari et al., 2013).

Four types of markers are used during the genetic diversity characterization: morphological, biochemical, molecular, and cytological. The molecular types present the particularity of use under analysis at any stage of plant development (Martuscello et al., 2015, Vieira et al., 2015). Among molecular markers, ISSRs (Inter Simple Sequence Repeat) stand out, because they do not require prior information of the DNA sequence and present laboratory procedures with good transferability (Dias et al., 2015). ISSR are semi-arbitrarily amplified by PCR (polymerase chain reaction), using a complementary primer for a designated microsatellite (Nilkanta et al., 2017). In the Stylosanthes genus, ISSR markers have been considered more efficient than both RAPD and STR markers to detect genetic variability (Nagaich and Chandra, 2009). Thus, our study aimed to evaluate the genetic diversity distribution in four populations of S. scabra in the semiarid region of Pernambuco state from Brazil using ISSR markers.

The samplings were carried out in September 2015. Samples of 76 S. scabra plants were used from 4 natural populations in the semiarid region of the Pernambuco state, Brazil (Table 1) and 19 individuals represented each population.

For DNA extraction, young leaves were collected following the methodology adjusted for this genus by Santos-Garcia et al. (2012). The DNA extracted was quantified by comparison with lambda standards (Invitrogen, Carslbad, CA, USA) of concentrations known in ng μL-1 (100, 200 e 500) in 0.8% agarose gel. The purity integrity of the DNA samples was confirmed in a spectrophotometer under UV light (260/280 nm).

The amplification products were separated on a 2% agarose gel stained with Sybr Gold (Invitrogen), using the 100 bp marker (Invitrogen) and visualized under ultraviolet light and recorded on the digital photodocumentator Vilber Lourmat. The polymorphisms obtained using ISSR were tabulated according to the presence (1) or absence (0) of bands.

The segregated amplicons numbers ranged from 9 for the UBC808 primer to 16 loci for UBC810 primer, which showed 16 loci (Figure 1) and reached 100% polymorphism (Table 2). The values found in our work are similar to other studies that used dominant markers in Mimosa caesalpinaefolia (Araújo et al., 2016), in Croton tetradenius (Almeida-Pereira et al., 2017) and in Desmanthus sp. (Costa et al., 2017).

The matrix correlation between genetic distance and geographic distance was significant according to Mantel test at 1% probability. However, the high correlation between both distances is uncommon in the literature (Jamnadas et al., 2006; Vigna et al., 2011). According to Zhao et al. (2012), environmental factors, mating system, population size and genetic flow are more important than geographic distance in population differentiation.

The Petrolina population presented the highest number of private bands (Figure 2) and greater variability, contributing to the appearance of DNA fragments (Szpiech and Rosenberg, 2011). According to Elstrand (2014), the occurrence of private bands is related to the average number of exchanged migrants per generations among populations and their presence (private bands) may indicate gene flow reduction. 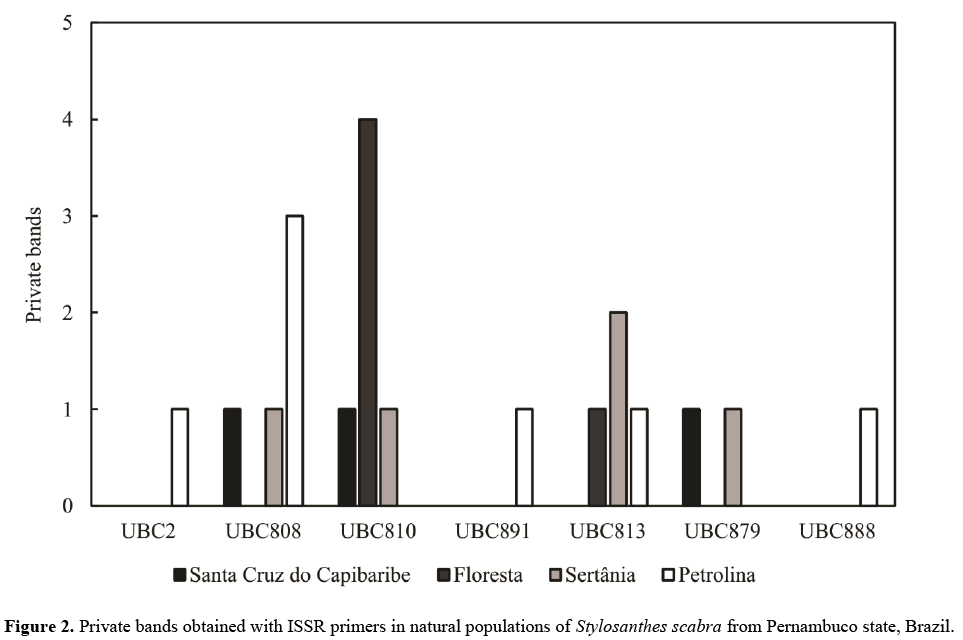 The majority part of genetic variation (60%) was distributed among populations and 40% was distributed within populations, according to the AMOVA results. The species with autofecudation exhibit greater genetic diversity among the populations (Buzatti et al., 2012), whereas this is different for the plants with high rates of alogamy. In a study by Santos-Garcia et al. (2012) with microsatellite markers, S. capitata (which may present alogamia above 20%) did not present a correlation between the genetic distance and the collection sites, although few accesses by collection site were considered by these authors.

The population disposition can be visualized by the graphical distribution of species variability (Figure 3). Thus, four groups were also formed among the samples collected and followed the divisions by collection sites, differentiating the four populations. This grouping occurs by geographic isolation and due to autogamy in S. scabra (Chandra et al., 2009). In these cases, superior genotypes tend to stand out and populate the population with the largest number of offspring, increasing the similarity among them. Barros et al. (2005) also observed a trend of watershed separation for Stylosanthes accesses, collected in Bahia and Minas Gerais, both states from Brazil.

Figure 3: Representation of 76 individuals from four natural populations of Stylosanthes scabra, according to molecular data with ISSRs using the "Structure" program. The individuals are represented by vertical bars with coloration, according to the group belonging (four groups, K = 4). Group 01 - Santa Cruz do Capibaribe; Group 02 - Floresta; Group 03- Sertânia and Group 04- Petrolina.

Bayesian analyses showed a maximum K value = 4, confirming the well-defined genetic structure of the four populations. The results corroborate the expected, due to the low number of migrants and high genetic differentiation among the populations. According to Rossi et al. (2014), the genetic structuring of population occurs when the maximum K value coincides with the population’s number and the individuals of each population are grouped. Thus, there is intra-population genetic variability and the four sampling locations may be recognized as four distinct populations.

Finally, the ISSR markers used in our study were able to determine the genetic variability in S. scabra. There was a greater variability among populations than within populations, which showed the importance of S. scabra collections in different cities for the construction of germplasm banks. We suggest future collections, emphasizing Santa Cruz do Capibaribe and Petrolina (both municipalities in the state of Pernambuco, Brazil), to exploring the variability of this genus in these places.