Epidemiological and pathological studies on the helminthic parasites in native chickens of Tabriz city, Iran

A study of intestinal helminthic parasites of domestic chickens was carried out in Tabriz city, Iran during 2016. One hundred (100) gastrointestinal samples were examined in necropsied chickens microscopically using the lactophenol and carmine-acid staining technique. The result showed a high prevalence of intestinal parasitic infection. Out of 100 domestic chicken, 37 (37%) were infected by the parasite. Nematodes had the highest prevalence 25 (68%), followed by the cestodes with the prevalence of 12 (32%) in the parasitic infested birds. Nematodes especially Ascaridi agalli 9 (16 %) and Heterakis galinarum 16 (64 %) were most prevalent in the nematode infested birds. Raillietina tetragona 12 (100%) was found to be the highest in occurrence among the cestodes infested birds. No trematode was encountered among the infested birds. The average parasite burden per chicken was found to be 5.7 and majority of the species were restricted to the small and large intestine. 14 (38 %) cases of mixed infections were encountered out of the infested poultry. The study reveals that there was a high prevalence of intestinal parasites of domestic chicken in the study area. This calls for improved management and disease control to enhance their potential.

Domestic chicken (Gallus gallus domesticus) is widely reared traditionally in the tropics (Hodasi, 1979; Permin and Hansen, 1998). Chickens are the most important protein sources of human population in some developed and developing countries of the world and serve as means of generating income. The local family poultry is an integrated component of nearly all rural and some urban households in Iran. The main advantage of indigenous breeds is that their production is not labour intensive. They can thrive under adverse conditions (e.g. poor management, diseases, lack of feeding and predators), which may cause low productivity and high mortality (Akinwumi et al., 1979). Since these domestic chickens are sources of ready cash and meat to the local communities, their potential could be enhanced through improved management and disease control. Parasitic diseases are problem wherever poultry are raised whether in large commercial operations or in small backyard flocks and economic losses can be significant (Fatihu et al., 1991). These parasites constitute a major factor limiting fruitful production in poultry industry by affecting the growth rate of the flock resulting in organ malfunctioning and finally death (Soulsby, 1982). Effective control measures, however, can be realistic if based on a thorough knowledge of the epidemiology of the endemic infectious agents. Limited studies undertaken on commercial farms which raise mainly exotic birds indicated that helminthes infection is a threat to the Iran poultry industry (Oyeka, 1989). There is a definite paucity of information on infections of indigenous chicken especially in Tabriz city of Iran. However, some studies have been carried out in Northern and Southern Iran (Eslami, A., Ghaemi, P. and Rahbari, S., 2009). Poor management systems and most important diseases are the major cause of financial loss in poultry production (Oluyemi and Robert, 1979). The domestic chicken has a wide range of feeding habits including feeding on faeces, which may be carrying stages of parasites, thus predisposing them to parasitic infections (Adang 1999). Heavy gastrointestinal helminthiasis is characterized by retarded growth, emaciation, decreased egg production, mucoid diarrhoea, catarrhal, loss of appetite, anaemia, weakness, paralysis and death (Nair and Nadakal, 1981; Fatihu et al., 1991).

Parasites in birds cause pathogenic changes, which was ranging from nodule formation, dilations of the gut, and even severe enteritis. Heavy infestation adversely affect the health of chickens with loss in body weight; decrease the host resistance against infections, decrease growth, damage in the intestinal mucosa, reduction in egg production, emaciation and death (Nideou et al., 2017). In addition, parasites consuming nutrients and vitamins, decreasing feed utilization, producing toxins, and causelosses in poultry. In an infected flock, production will be 25% lower than normal cases (Foreyt, 2013).

The aim of current study was to investigate the helminthic parasites in domestic chickens of Tabriz city, Iran, and evaluate their prevalence, species composition, preferred site of infection and histopathological effects.

The study was conducted in Tabriz city, Iran. The study vicinity has a subtropical weather, the raining season is usually from April to October while the cold season begins in November and ends in March.

The study area was visited twice per month and maximum of 20 samples were collected every month from different domestic chicken from August to October 2016. One hundred gastrointestinal tract samples were collected from local breed chickens which slaughtered at the local markets and shops and located in Tabriz city, Iran. The gastrointestinal tracts were evaserated into plastic bags and sent for laboratory examination and identification in the veterinary medical faculty of Tabriz, Islamic Azad University.

The gastrointestinal tracts separated into gizzard, crop, small intestine, large intestine and caecum after which each region was cut and opened by longitudinal incision. Intestinal scrapping was done and any parasite seen was removed with forceps, washed in saline and identified. Examination of samples for helminthes was based on lactophenol and carmine-acid staining technique (Soulsby, 1982). Samples from small intestine and large intestine were fixed for 48 h in 10% neutral buffered formalin, dehydrated by passing successfully in ascending concentration of ethyl alcohol, cleared in xylene and embedded in paraffin. Sections (5-6 μm thick) were prepared and stained with H&E stain for microscopic examination (Bancroft et al., 2012).

The obtained results were analyzed using descriptive statistics. Level of significance was set at p<0.05.

The overall prevalence of the parasitic infection revealed that Out of 100 domestic chickens were studied, 37 (37%) were infested by parasites. Nematodes had the highest prevalence 25 (68%), followed by the cestodes with prevalence of 12 (32%) of the infested chickens. No trematode was encountered among the infested birds (Table 1).

Nematodes especially Ascaridia galli 9 (16 %) and Heterakis galinarum 16 (64 %) were most prevalent nematode in the infested birds. Raillietina tetragona 12 (100%) was found to be the highest in occurrence among the cestodes infested birds (Table 2). 14 (38 %) cases of mixed infections were encountered out of the infested poultry as shown in Table 3. 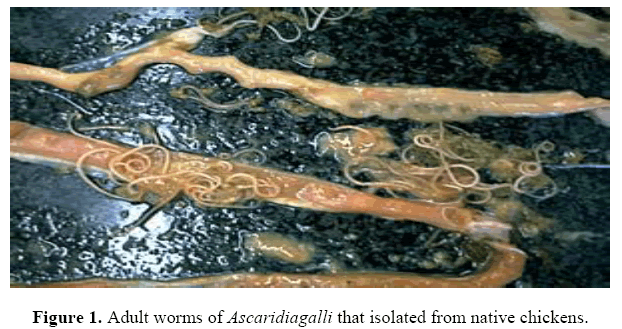 Alae, which run almost the entire length of the body, are ridges formed by the thickening of the cuticle that may act as receptors for molecules which stimulate reproduction. Adult female and male cecal worms differ in length, with the female (10 to 15 mm) generally being larger than the male (7 to 13 mm). Both sexes have a pointed tail, males having a precloacal sucker at the posterior end (Figure 2). Figure 2: Adult worm of Heterakisgallinarum that isolated from native chickens.

Raillietina tetragona was the only recorded cestodes and grossly was a typical tapeworm structure, composed of a series of ribbon-like body segments, gradually enlarging from the anterior end towards the posterior. It is whitish in colour, highly elongated, dorso-ventrally flat, and entirely covered with a tegument. The entire body is divisible into 3 parts, namely the head region called scolex, followed by an unsegmented neck or growth region, and then by highly segmented body proper called strobila. The scolex is a bulbous knob-like structure bearing suckers and a rostellum, which are the organs of attachment to the host. A defining structure from those of other tapeworms is a single prominent rostellum surrounded by four suckers Individual segments in the strobila are called 'proglottids' and are entirely covered with hair-like microtriches. These microtriches are the absorptive structures for feeding, and there are no digestive organs (Figure 3). 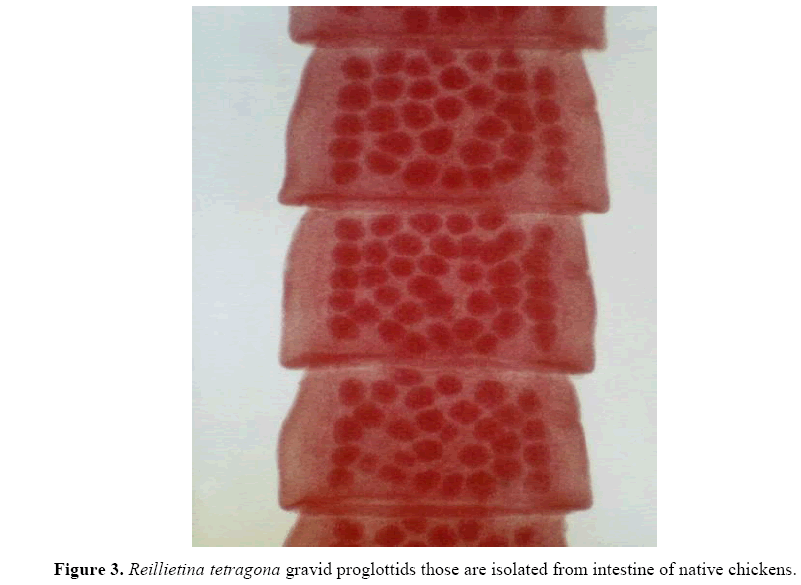 Figure 3: Reillietina tetragona gravid proglottids those are isolated from intestine of native chickens.

Histopathological examination of the infested intestines in the early stage showed acute enteritis with congested blood vessels in the mucosal layer together with diffuse mononuclear cells infiltrations in the lamina propria and submucosa (Figure 4). 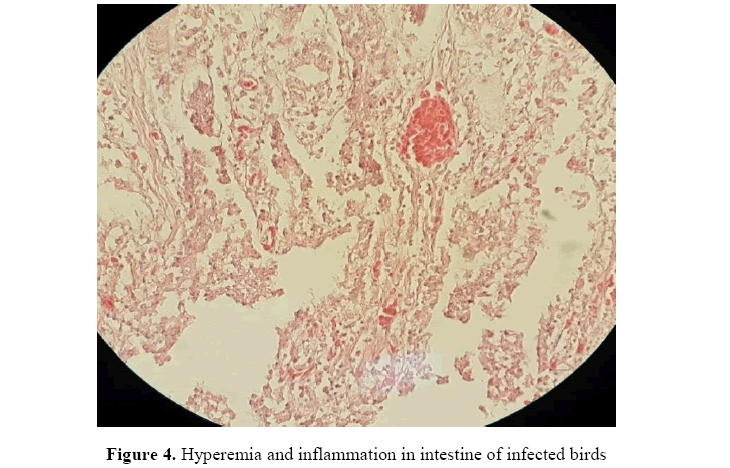 Figure 4: Hyperemia and inflammation in intestine of infected birds

While in the late stage, there were necrotic enteritis with diffuse mucosal degeneration and sloughing, hemorrhage, and mononuclear cells infiltrations (Figure 5). 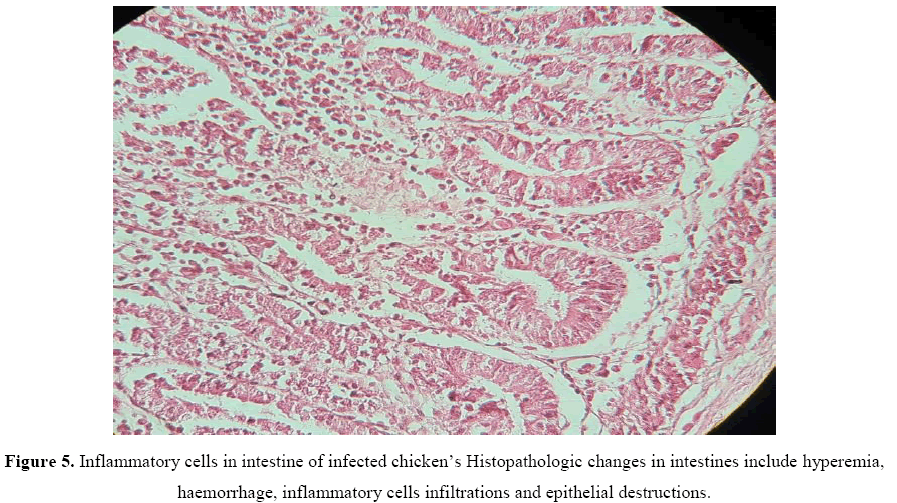 The occurrence of parasites is probably, the most damaging infections of domestic chickens and a source of serious economic loss. The main effect of helminthic parasites is the amazing losses they cause to animal industries through meat contamination and morbidity (Naem and Eskandari, 2005). The generally high prevalence rate observed in this report could be due to the fact that birds kept under free range or backyard flocks are not normally fed with grains in the morning (which use to be the practice in the early years) before going out for grazing. Lack of this practice could be attributed to the present poor economic condition. The intermediate hosts (e.g. dung beetle, grasshopper, cockroach, crustaceans, earthworm and snail) for some of the helminthic parasites found are available in the environment and could constitute problems in chickens reared on free range or backyard scavenging production system. The majority of parasites reported here could be potentially pathogenic for the poultry and some to human by inducing enteritis, ulceration or granuloma followed by anorexia, depression, emaciation and death. Due to the effects on body condition, it has been shown that weight loss due to helminthic infections in domestic chicken can be outstanding (Permin and Hansen, 1998). Similar reports of helminthic infections found in domestic chickens in this study have been documented as described from other parts of Iran (Eslami, A. and Anwar, M., 1973). The result of this study showed that a large number of helminthic parasites heavily parasitized the domestic chickens. Mixed infections were also encountered and mostly with nematodes. These results are comparatively similar to applied studies in some regions such as Urmia (Naem, S and Eskandari, S. 2005), which reported high prevalence of the helminthic parasites. Previous studies have attributed this high endemicity to poor sanitary conditions and lack of health services (Garedaghi, Y, 2011 and Eslami, A. and Anwar, M., 1973). This study which is in agreement with Eslami, et al., (2008) further support the observation that parasites are most predominant in subtropical countries due to the climatic and environmental conditions prevailing there which favor helminths growth. There asons for being the nematodes are the predominant parasites are that nematodes do not require intermediate hosts and at the same time they are soil transmitted parasites, the adults lay many eggs daily which can retain their viability for as long as 12 months and so domestic chickens are constantly picking up viable eggs from the droppings that contaminate the environment as they feed (Permin and Hansen, 1998) and this also predispose them for heavy parasite burden. Cestodes require intermediate host to complete their life cycle and so transmission is dependent on the availability of the intermediate hosts. Most of the parasites were restricted to the small intestine, particularly the duodenum where there is optimum concentration of saline and glucose (Fatihu et al., 1991). Earlier report (Smyth, 1976) suggests that the preference for the small intestine by these parasites is to complement their physiological osmotic feeding nature where nutrients exist in dissolved form. The differences in the worm burden could be attributed to climate difference, availability of intermediate host, and possibly host factors such as host immunity. Parasitic intervention to limit hallmark complication of the infection is thus necessary in poultry industries.

Parasitic infestation is the major cause of financial loss in poultry and huge losses to the livestock industries. The work carried out revealed high helminthic infections with nematodes having the highest prevalence. This may however increase due to seasonal or climatic abundance of specific invertebrate hosts. Therefore, improvement of sanitary practice to interrupt the life cycle of the parasite species and as such reduce the rate as well as the burden of the infection in poultry farm is recommended.

The authors wish to thanks the Islamic Azad University, Tabriz Branch, Tabriz, Iran, and all laboratory technicians for technical aids in this project.

We certify that there is no conflict of interest with any financial organization regarding the 135material discussed in the manuscript.