The X-linked hyper-IgM (XHIGM; HIGM1) syndrome is an uncommon primary immunodeficiency disease caused by mutations in the gene for CD40 ligand and characterized by normal or elevated serum IgM, low or absent serum levels of IgG, IgA and IgE, and defective T-cell function. Here we reported a case of XHIGM with acquired toxoplasmic encephalitis. The patient experienced recurrent serious bacterial infection and recurrent neutropenia from infant. He suffered from lethargy, somnolence, and ataxia. Brain imaging demonstrated typical multiple ring-enhancing lesions which has never been reported previously in the literature. Toxoplasma IgM was positive. Immunological evaluation revealed low IgG level and high IgM level. Sequencing analysis of the CD40L gene revealed a splice mutation within exon 5 at nucleotide position 654 (c.654C>A). Patient’s mother was a carrier. Following treatment with intravenous immunoglobulin(IVIG), azithromycin, trimethoprim-sulfamethoxazole, granulocyte colony stimulating factor (G-CSF) and sulfadiazine, they gave up treatment at the beginning of his Toxoplasma treatment. The patient died 3 months later. In summary, an early diagnosis is very important

cells can produce IgM antibodies by themselves. But if IgM antibodies will convert into IgG, IgA, and IgE antibodies, the interaction between B cells and T cells is needed. The X-linked hyper-IgM (XHIGM; HIGM1) syndrome is an uncommon primary immunodeficiency disease caused by mutations in the gene for CD40 ligand, which is a T-lymphocyte cell surface molecule Allen RC, et al. (1993), Jerry AW, et al. (2003). At that condition, the CD40 ligand of T cells cannot bind to the CD40 protein on B cells which cause the failure of B cells converting to other antibodies. So, it is characterized by normal or elevated serum IgM, decrease or absent serum levels of IgG, IgA and IgE. Patients with HIGM are susceptible to opportunistic infection, neutropenia, autoimmune diseases, and malignancies, and have an increased susceptibility to infection with a wide variety of viruses, bacteria, fungi, and parasites Qamar N, (2013), Davies EG, (2010). Here we report a case of XHIGM with CD40L gene mutation presenting with acquired toxoplasmic encephalitis in a young Chinese boy.

This patient was a 2-year-old boy. He presented with recurrent pulmonary and neutropenia from infant and had been admitted in local hospital for several times. At 10-month-old of age, the boy was admitted to the pediatric intensive care unit (PICU) of West China Second University Hospital, Sichuan University for severe pneumonia and respiratory failure. The patient was hospitalized again with sepsis, peritonitis, and granulocytic deficiencies at 1-year old. And in the last episode of hospitalization at 2-year old, he presented lethargy, uncontrollable somnolence, and ataxia. So, this time he was admitted in neurology department.

Physical examination: his mental status changed with drowsiness, and had an abnormal gait. A multi finger deformity was visible outside the left thumb. The pathological sign and meningeal irritation sign were all negative. His cranial MRI (Figure 1), Axial (A) and sagittal (B) MRI suggested multiple ring liked nodules lesions in bilateral cerebral hemisphere cortex, bilateral basal ganglia, and dorsal thalamus. The white matter near of left side of deep island lobe, temporal lobe and frontal lobe show demyelination lesions. Blood tests revealed a significantly decrease in neutrophils (9%, 0.32 × 109/L). Bone marrow biopsy showed a decreased proportion of granulocytes. There are two questions we want to find out:

Why did the patient has recurrent serious infection and neutropenia? Was he immunodeficiency disease? So, we checked the immunologic function.

What’s the reason to cause the patient’s brain damage? The Toxoplasma IgM of the TORCH (Toxoplasma, Rubella, toxoplasmosis, other) test showed positive. And a investigation of pathogens, including tuberculosis, viruses, atypical pathogens, revealed no abnormalities. The routine and biochemical examination of cerebrospinal fluid (CSF) were normal. Further examinations revealed that serum immunoglobulin levels of IgG (1.00 g/L) was significantly reduced (The normal level of IgG is 3.41-19.6 g/L) and IgM (1.78 g/L) level was higher than normal (The normal level of IgM is 0.43-1.63 g/L). The IgA level was within the normal range. Lymphocyte immunization test indicated a decrease in the proportion of B lymphocytes (10.2%) and NK lymphocytes (2.2%). Gene sequencing analysis of the CD40L gene revealed a homozygous C to A substitution in exon 5 (c.654C>A Fig2) and the amino acid variant was p.c218 × 44. The family DNA analysis showed that mother was the carrier. His father and sister were normal. The diagnosis of X-linked HIGM was confirmed.

Following treatment of medicine included intravenous immunoglobulin (IVIG), azithromycin, trimethoprim-sulfamethoxazole, granulocyte colony stimulating factor (G-CSF) and glucocorticoid agents. After treatment, his immunoglobulin level of IgG (15.6 g/L) returned to normal and IgM (1.69 g/L) level was still higher. The anti-Toxoplasma treatment had just been started, but the family members gave up the treatment and left the hospital (Figure 2). 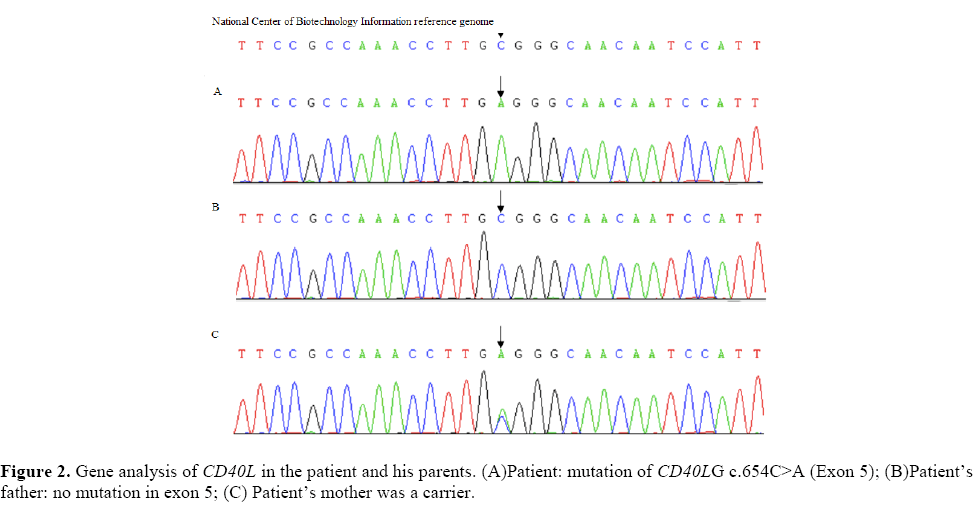 XHIGM, accounting for 65-70% of all HIGM cases, is the oldest and most common class of HIGM, which is caused by mutations in the gene for CD40 ligand Li G, et al. (2015). The CD40L gene is in the long arm of X-chromosome (26.3-27.1), and it contains 5 exons that are responsible for coding amino acids. CD40L, belonging to the superfamily of tumor necrosis factor, is expressed on the surface of the active CD4+ T cells, and it converts immunoglobulin secreted by B lymphocytes into transformed classes by acting on CD40 molecules. Once the CD40L gene mutated, the expression of CD40L on the surface of T lymphocytes was reduced, or CD40L could not bind with CD40 molecules or affect the formation of CD40 trimer Jesus AA, (2008), An Y, (2010). Therefore, the CD40L gene defect destroys the T-B cell interaction and damage germinal center formation, and affects CSR Imai K, (2003). So far, more than 250 unique mutations have been detected in CD40L gene. To make a definitive diagnosis of HIGM requires inclusion of decreased serum IgG and one of the following:

2. Family history of one or more maternally related males with an HIGM1 phenotype or diagnosis.

Over 75% of the patients with XHIGM developing symptoms of immunodeficiency in their first year of life, are susceptible to neutropenia, autoimmune diseases, malignancies, and have an increased susceptibility to infection with a wide variety of viruses, bacteria, fungi, and parasites. And 2 specific clinical problems were especially prominent, P. carinii pneumonia and neutropenia. Although these clinical presentations can be found in other primary immunodeficiency diseases, it should prompt consideration of the diagnosis of the XHIGM syndrome Cham B, et al. (2002).

Our patient suffered recurrent serious bacterial infection and recurrent neutropenia. And immunological functions had shown low IgG level and high IgM level. Sequencing analysis of the CD40L gene revealed a splice mutation within exon 5 at nucleotide positionc654 (c.654C>A). And family DNA analysis revealed that mother was the carrier. When he was hospitalized for the last episode in our hospital, he had definite neurological symptoms and signs. Toxoplasma IgM was positive and brain imaging demonstrated radiographic appearance (e.g. multiple ring-enhancing lesions) which has never been reported previously in the literature. Unfortunately, the patient’s family gave up the treatment at the beginning of his toxoplasma treatment. Toxoplasmic encephalitis is an opportunistic infection that progresses rapidly and threatens the patient’s life. And 3 months later, the child died. If this patient could be diagnosed at early stage and received regular IVIG or receive allogeneic hematopoietic cell transplantation, he may avoid intracranial involvement and have the chance to survive instead of death. If toxoplasmic encephalitis is suspected in immunocompromised patients with ring enhanced lesions on brain MRI, accurate diagnosis and medical treatment should be performed at the earliest. In summary, early diagnosis is very important. Gene testing is the final standard of diagnosis. Genetic screening during pregnancy and early detection of genetic testing after birth are helpful for early diagnosis.

This study was supported by the Key Laboratory of Obstetric &Gynaecologic and Pediatric Diseases and Birth Defects of Ministry of Education, China.